“SOPA is on hold”


When I heard the news that SOPA in its current form has been put on ice, I was relieved. I had outlined the reasons why I am opposing SOPA (↑) a couple of days ago on this blog.

Another battle in this ongoing war has been won, but the war is not over yet. Will there ever be an end to the debate?

Like look at this article in the Forbes magazine about what happened 30 years before SOPA, the Motion Picture Association of America (MPAA) feared the VCR (↑) (video cassette recorder).


The new target is the Internet

There will always be a struggle between those who wish to defend the status quo and those who embrace change.


Don’t be afraid of “the New,” embrace it and look for opportunities.

As a side note: I was positively surprised that Neelie Kroes (↑), Vice President of the European Commission, responsible for the Digital Agenda for Europe, criticized SOPA very publicly. 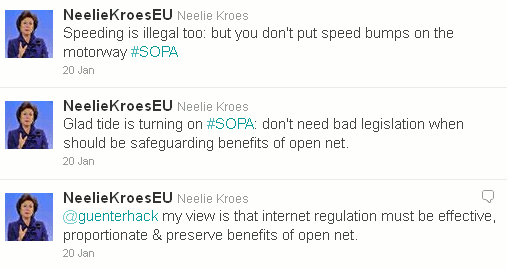 Neelie Kroes tweets about SOPA and defends a free Internet.

To sum it up, here is a rundown of some articles I found useful.

+Pete Cashmore (↑) of Mashable posted a couple of links about the demise of SOPA. It’s a battle won but the war might go on.


Stay tuned as the protectionist will fire back as soon as they have caught their breath.

For everybody else: He wrote that Europena politicial seem to be less corrupt.

Not sure if this is true.

Note by editor: Yeah, Justin is a comment spammer.

Good that this is over now.

Thanks for putting the links together. Cheers from Poland - have a nice day!