Pick One - Spam or not Spam


I came across two interesting articles on internet Retailer (↑) in my email inbox today . I thought I’ll share them with you. Let’s start with the not so good news.

Canadian law makers create FISA -- Fighting Internet and Wireless Spam Act -- which will be in effect in 2012.

As long as you want to reach Canadian consumers or by Email you will need to adhere to this new law.

The law will apply if:

Most important implication: Opt-in first is a strict requirement!

You’ll need the permission from consumers before you may send commercial email to them. The usual opt-out method which many US-based businesses use today will be prohibited.

Read the full article: A new hurdle for e-mail (↑).

As usual the law will affect regular businesses only. Spammers don’t care.


The One Big Chance: The inbox Goes Mobile

It is a trend that people are connected to the Net and to their email inbox more often and on multiple places. You don’t need to wait till it’s raining and people stay at home at their desktop computer. They take their email everywhere, anytime.

That’s an opportunity, isn’t it.

But you need to be prepared for it. Do your commercial emails display nicely on those mobile devices with the tiny screens? If not, change that.

Thanks to the fact that most if not all social media and networking sites like Facebook, Twitter, and G+ as the latest star, connect to your email inbox to some extent. I.e. even the young generation knows what email is. It does not main that they like to consume email but email has one big advantage over the walls on Facebook or the Twitter and Google Plus streams.

It’s an archive, one can sort and use filters. It’s much easier to find a specific message in email than on social media


Read the full article: With consumers communicating on the move, e-mail must go mobile, … (↑)


Before we get started I want to put the title of this post into the proper perspective, right away.

No, I don’t have anything to hold against Chris Brogan (↑), not at all. He is a fine person! Otherwise I would not follow him on Twitter, in Google Reader, now in Google+, and probably elsewhere.

Unfortunately for him -- I hope his ego can cope with that -- he becomes my poster child for something he is not even responsible for himself. (Life can be tough, isn’t it.)

Chris posts a lot on Google+ (at least now) and his followers are eager to comment and share. The result is that he (as well as other heavy posters like Robert Scoble (↑), Trey Ratcliff (↑), … show up first almost every time when I look at my stream.

Don’t get me wrong, I follow them, because they usually have blurbs of value to share. Anything from entertaining to educating …

It’s just that I don’t want them right in my face all the time whenever I look at my stream.

When taking this screenshot above it just happened that Chris Brogan was up there twice in a row. It was not planned. Seriously. It could as well have been someone else. Sorry, Chris.

Robert Scoble has addressed the problem and has described how you can organize your circles to take your stream back into your possession. You can read Scoble's tips for newer users of Google+ (↑) (a post on Google+, I believe you can read it even without being signed up for G+). Note his point 2.b.

But wait a second! Your stream should not be hijacked in first place.

Isn’t that something the user interface is supposed to protect you from? That question might be a bit philosophical and we don’t need to address it here but why should you be foreced to arrange your circles in a certain way so that your stream remains usable?

Isn’t it fascinating how social networking platforms are taking over the Internet in a storm?

Ease of use and multimedia capabilities seem to be the main driver behind this development. It makes it fun for non techie people to use the Internet, to play around, and to communicate.

Fred Wilson, principal of Union Square Ventures, discussed today that he was quite shocked—even though he had anticipated it—when he realized that social networking has overrun email (↑) already. 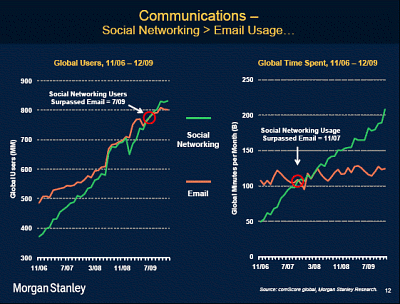 
Now, let’s be honest and compare the two.

Common email clients (even Gmail) smash a wall of incomprehensible letters into your face. I am talking about the inbox displayed as a dense list. Too many emails, too many of them irrelevant, and mostly not fun at all.

On the other hand when composing a new message you are staring at a scary white page. Ever had writer’s block in that situation?

In contrast to that you are basically navigating in a space that’s comparable to your email client’s address book. But an address book on steroids.

You see avatars and blurbs with what your friends are up to right now, videos, pictures, full multimedia. And it’s so easy to use. You don’t need to compose a new message, you just click one time or even type your response directly. Takes you seconds and you don’t have to switch platform to do so.


Don’t write off email, yet.

An email address is still a valuable asset of contact information for a business. For now and the near future. And I have pointed out some additional reasons in a previous discussion about email marketing versus social media.

But the one piece of contact information that might prove to be even more valuable in a short time is a mobile phone number.


Mobile Is Coming With Light-speed

When I compare the quality of contact information, then mobile phone number is a clear winner. It has certain advantages:

Regardless of mobile Internet usage with iPhone, Blackberry, Google Phone, whatever. Messages from the Internet can “ring through” to the user. An increasing number of services are taking advantage of this.

Facebook and Twitter can optionally handle your mobile phone number for texting purposes. Airlines offer to notify you about delays, etc.

Besides those “Internet attached cases”, the Net arrives at more and more users while they are on the road so to speak. 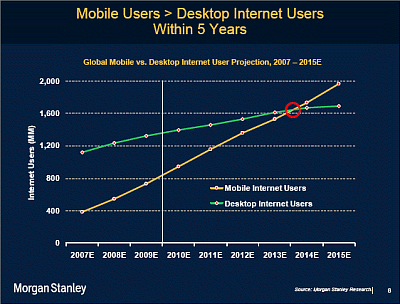 What does that mean for you?

Big opportunities of course. Like if you are dealing in information product marketing, it’s smart to think about convergence.

This technological and social revolution does indeed change the way we communicate privately. This happens almost automatically.


However, it takes effort to change the way your business communicates.

Expand your sphere of influence.

I have recorded a short video with two tips for improving your marketing in 2010.

Actually I have already recorded it on December 28, but so far only had uploaded it to a private membership. But why not share it with everybody?

This year I will focus on improving how I use words and further build relationships.


Social media is the big buzz. We've been swept up in the currents of Linkedin, Facebook, and Twitter. We can allow the currents to carry us to new connections, new business, and massive reach and visibility. Or we can get caught in the riptides that pull our reputation under.

Mistake one: No purpose or focus. What is your objective? Why are you using social media? What are you trying to accomplish? To make new contacts? To promote yourself or your business? To research? To reach new markets? To establish yourself as a thought leader? To find a job?

Mistake two: No strategy How will you use social media? How often? Which forms? Frequent communication is better than an occasional posting.

Mistake three: Speaking to the wrong audience Who is your audience? Are you simply collecting names or are you more targeted? Linkedin is more business-like and professional. Facebook is more social and casual. For example, if you're serious about job hunting you'll want to use linkedin as well as Facebook.

Mistake four: Projecting the wrong image. I've read posts about working on a boring project for a client. Maybe you know your client isn't one of your connections. But what about the people who referred you? What are you saying to them? People tend to let their guard down more easily on Facebook. It's inappropriate to talk about a nasty divorce, problem kids, or drunken driving. This is not a private conversation. Worse yet, is to use another's name in a survey. Ex. "Do you think Jane Doe is good looking?" People fail to realize that they are always on stage. Mistakes after a live presentation can be forgotten. In social media, your blunders live forever on the internet.

Mistake five: No real message. What do you plan to say? How will you say it? What is the style and tone of your communication? Nobody is really interested that you're watching TV. This kind of banter is content free. Provide value and you'll attract more followers. New blog entries, an interesting statistic, a link to an article or even a thought-provoking quote or book reference will make you more interesting.

Mistake six: Hard selling: Nobody likes a presenter who sells from the platform. It's no different in social media. If every post is an ad for your products and services you'll soon be disconnected. Let people know about your accomplishments but don't tell them to buy.

Mistake seven: Not building relationships. Many people put up a profile and never visit the site. Maximize your presence by updating your profile to let people know what you're doing. Ask questions. Answer questions to establish your expertise. Invite people to connect with you and then stay in touch. Be a resource. Connect others. A good presenter knows how to create a relationship with the audience.

Nothing will ever replace face-to-face communication. But meeting in person can be time consuming. Social media can be a phenomenal platform to build a reputation and to communicate with the world.

Just be sure you know how to present yourself, your message and your value.


Diane DiResta (↑) is president of DiResta Communications, Inc., a New York City consultancy serving business leaders who want to communicate with greater impact - whether face-to-face, in front of a crowd or from an electronic platform. DiResta is the author of Knockout Presentations: How to Deliver Your Message with Power, Punch, and Pizzazz, an Amazon.com category best-seller and widely-used text in college business communication courses.

For a free audio course and newsletter visit http://www.diresta.com (↑)


Today I want to thank Seth and each and everyone in the Tribe for inspiration, guidance and some for a new friendship.

John W. Furst for E-biz Booster Blog and Triiibes.com. (The avatars are blurred to protect the privacy of our members.)

For those who haven't read the book, here are the key points for me.
→ Continue reading: