Recently I have described how I fixed a wrong setup of the tweetmeme button on my blog. I manually modified the blog template and I only mentioned briefly there is a Wordpress plugin for Tweetmeme.

Acknowledging Wordpress as the most popular blogging platform I need to follow up with a more detailed description of the Tweetmeme WP Plugin.

The installation and configuration is straightforward and shouldn't be a problem for anyone who has installed Wordpress on her hosting account successfully.

I provide some screenshots for your orientation.

How To Setup A Tweetmeme Button On A Wordpress [HQ video] (↑)

Installation of the Wordpress Tweetmeme Plugin

You can download the plugin from Tweetmeme (↑) or directly install it with the Wordpress Admin Interface. 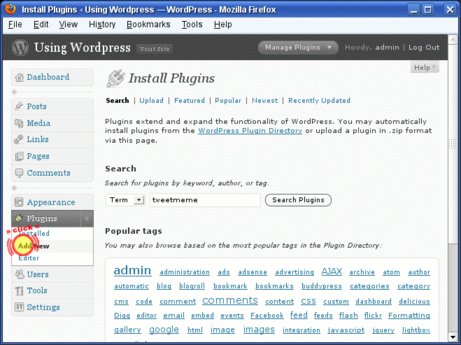 A couple of days ago I have removed my do-it-yourself Tweet-it button and put the button from Tweetmeme (↑) on this blog.

It's more encouraging for website visitors to retweet a story that already has been retweeted a lot. People follow the crowd.

Besides that the button looks pretty, too.


Update Dec. 12, 2009: I have added a blog post about the Tweetmeme Wordpress Plugin.

However, as simple as it is to put a button on a blog or website I still got it wrong.

Browsing the Web I can see that I am not alone.

Therefor I decided to write a short article about how to get Tweetmeme up right.


The problem on my site was as follows: 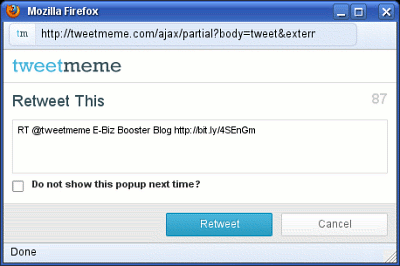 Tweetmeme, with the wrong setup

Do you spot what's wrong?

At first, it should be my twitter username that's retweeted, shouldn't it be.

Secondly, the text is not really informative or encouraging a retweet, isn't it.


Thanks to Andy Beard (↑) for shooting a quick email to me and pointing this out. Andy is someone whose suggestions got picked up by the tweetmeme developer team (↑) after his blog post in May, 2009. Now Andy uses Tweetmeme on his blog.


Setting Up The Tweetmeme Button Correctly

Obviously I have screwed up this rather simple task. Shame on me.


After my post Is Google Sidewiki Evil? I simply ignored the subject altogether and had disabled this function in my Google toolbar.

Yesterday, I noticed two very good posts with additional insights, good user comments, and I also added my mustard (as Germans would say) to the conversation and to the Google Help Forum as well.

But first things first.
Not many people are talking about this:

At least there is a documented API. All details about the Google Sidewiki API (↑) on Google's site. Here is what a developer can do with it.
→ Continue reading:


This shall be a very quick update and summary with my final SEO advice for some time. It seems that my chronological report about the evolution of SEO configuration on this blog confused many readers.

I apologize and make it good with this post.

It was not so much the fact that most of you live and breath in a Wordpress world. It was more about my deep dive into the abyss of Apache's URL redirection, .htaccess configuration, and the ever changing schemes of URLs used here on this blog. That's where I lost many of you.

It's too easy to get carried away while being intensively involved with fixing a problem.

Yesterday I already have emailed a short summary with Top 10 SEO Tips for Blogs (↑) to my newsletter subscribers. It lists the major points and adds you should make use of sitemaps and Google's free webmaster tools.

Now, in order to conclude this short, unplanned series of articles about SEO I have for you:

Let me start introducing the video with a catchy quote.


We reserve the right to do what we think is best.
--Matt Cutts, Google.com


I implemented a couple of SEO related (search engine optimization) changes on this blog. But I did not stop there. I introduced some new features for my readers as well.

As a result and the side-effect of it, the 10 or 15 latest blog posts have been re-published on the RSS feed with ever slightly changing URLs. I had the RSS feed turned off today to minimize the effect this had on Feedburner, and your RSS blog subscriptions.

I hope you can forgive me that faux pax. I wrote about those side-effects in the original article where I go in detail over the background for the SEO changes.


I must admit when I first setup my E-biz Booster Blog I did not know much about search engine optimization (SEO).

Finally I have changed and improved my permalink structure. It is not only more SEO friendly but in fact has increased usability, too. Whenever you change URLs it should be your goal to redirect your old URLs to the new ones because you

It is best to make sure the old and the new link structures work in parallel. That's exactly what I have done. Luckily Google has introduced a new feature in March 2009 that made that change more easy for me. You can read about that in a minute.

Bottom line, you don't have to be a SEO specialist from Stompernet.


However, let me start with the full story