Pick One - Spam or not Spam


I came across two interesting articles on internet Retailer (↑) in my email inbox today . I thought I’ll share them with you. Let’s start with the not so good news.

Canadian law makers create FISA -- Fighting Internet and Wireless Spam Act -- which will be in effect in 2012.

As long as you want to reach Canadian consumers or by Email you will need to adhere to this new law.

The law will apply if:

Most important implication: Opt-in first is a strict requirement!

You’ll need the permission from consumers before you may send commercial email to them. The usual opt-out method which many US-based businesses use today will be prohibited.

Read the full article: A new hurdle for e-mail (↑).

As usual the law will affect regular businesses only. Spammers don’t care.


The One Big Chance: The inbox Goes Mobile

It is a trend that people are connected to the Net and to their email inbox more often and on multiple places. You don’t need to wait till it’s raining and people stay at home at their desktop computer. They take their email everywhere, anytime.

That’s an opportunity, isn’t it.

But you need to be prepared for it. Do your commercial emails display nicely on those mobile devices with the tiny screens? If not, change that.

Thanks to the fact that most if not all social media and networking sites like Facebook, Twitter, and G+ as the latest star, connect to your email inbox to some extent. I.e. even the young generation knows what email is. It does not main that they like to consume email but email has one big advantage over the walls on Facebook or the Twitter and Google Plus streams.

It’s an archive, one can sort and use filters. It’s much easier to find a specific message in email than on social media


Read the full article: With consumers communicating on the move, e-mail must go mobile, … (↑)


Before we get started I want to put the title of this post into the proper perspective, right away.

No, I don’t have anything to hold against Chris Brogan (↑), not at all. He is a fine person! Otherwise I would not follow him on Twitter, in Google Reader, now in Google+, and probably elsewhere.

Unfortunately for him -- I hope his ego can cope with that -- he becomes my poster child for something he is not even responsible for himself. (Life can be tough, isn’t it.)

Chris posts a lot on Google+ (at least now) and his followers are eager to comment and share. The result is that he (as well as other heavy posters like Robert Scoble (↑), Trey Ratcliff (↑), … show up first almost every time when I look at my stream.

Don’t get me wrong, I follow them, because they usually have blurbs of value to share. Anything from entertaining to educating …

It’s just that I don’t want them right in my face all the time whenever I look at my stream.

When taking this screenshot above it just happened that Chris Brogan was up there twice in a row. It was not planned. Seriously. It could as well have been someone else. Sorry, Chris.

Robert Scoble has addressed the problem and has described how you can organize your circles to take your stream back into your possession. You can read Scoble's tips for newer users of Google+ (↑) (a post on Google+, I believe you can read it even without being signed up for G+). Note his point 2.b.

But wait a second! Your stream should not be hijacked in first place.

Isn’t that something the user interface is supposed to protect you from? That question might be a bit philosophical and we don’t need to address it here but why should you be foreced to arrange your circles in a certain way so that your stream remains usable?


You might have heard this statement very often when people are talking about their ideas, their products, their customers, …

You try to argue with them and they say,

My response in such a conversation is usually something like these:

“Have you tested it?”

The last one is a very significant one for businesses and marketeers. So many of you rely on assumptions rather than facts.

It is easier, cheaper, and quicker to test ideas and concepts than most of you believe.

In fact I think a lot of—especially smaller businesses—test a lot implicitly by just doing rather than putting items on a to do list or agenda for a meeting.


But still most businesses do not test enough!

The ultimate decision maker is the market, not a director, not a manager. (I am assuming fair play, no tricking, no monopoly.)

My position here is not necessarily innovative, creative in first place. It's listening and responding. There is room for innovation and creation but it usually isn't your cash flow star right away.


Continuous testing is the answer.

Making it a habit pays off big time.

P.S.: I think, I will write more articles about testing in the near future. 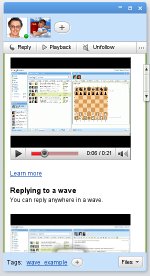 
About three weeks ago I euphorically wrote about Google Wave, had a Wave embedded in the blog post, got a lot of comments, … and did many things with Wave in the meantime.

Since then I also have started a list with my humble suggestions for improvement of the user experience.

Let me give you a quick update on my personal Wave experience.

Wave has already become a sort of everyday tool for me. My firefox plugin shows the number of unread messages in the inbox and the number of people I communicate with is on the rise.

We even use the ties from Wave into Google Groups to create private Waves with restricted access. Therefore, with a small circle of partners and friends Wave has partially replaced email for some communication needs.

Never having been fond of walkie-talkie style instant messaging or chat conversation or Twitter the feature of instantaneous, collaborative, style of communication is certainly a great one. And Wave crushes it. We nailed communication which would have taken much more effort and time for accomplishing the same results via email, chat, skype or phone.

The concept of hosted conversations with synchronous access for working collaboratively is just brilliant. The real power comes from the combination of — the removal of the barrier between — synchronous and asynchronous collaboration in one tool, one document.


Since I have started using Google Wave a couple of weeks ago I keep a list of potential improvements that come to my mind while working with it.

You can find my original wave at the link below (requires a Google Wave account).

In the list below I omitted some minor issues.


Usability And Other Improvements For Google Wave


(4) Right/Access Management: This will be essential to protect blips from being edited unauthorized and to keep conversations private.

Does the new Alexa Sparky add-on kick out Google?


What a surprise — for the first time I got search results surfed by Microsoft's Bing search engine. And I did not even intend that. All I wanted to do was to find a particular project for a Wave client (software) I read about on the Web. I typed my query into the address bar, hit enter, and got these results below.

Not necessarily what I was looking for. But wait a second … Why didn't Firefox serve the result from Google as usually?

Search result from Bing! Why?
(Click on the image to enlarge in new window.)


Well, I played around with Bing a tiny bit, right when Microsoft had launched their new search service but I did not stick with it for long. Honestly, Google is my most favorite search engine. Period. Google did not only catch me for search, but with a plethora of other great applications. From Gmail, to Google Docs, AdWords, … to their translation tool, and … Wave is the latest on the list. They hooked me up. Probably for life.

So I was quite surprised that I suddenly got Bing results displayed.

I remember that I had updated my Alexa Sparky add-on for Firefox this week. I also remember having seen a note about new features but I kind of ignored it. Now, it's obvious what had happened. Alexa Sparky is one of the FireFox Add-ons I use.